In 2018, the planning department released a study of Demolitions and replacement homes. Page 4 contains a bar chart showing the relative sizes of Arlington’s zoning districts: 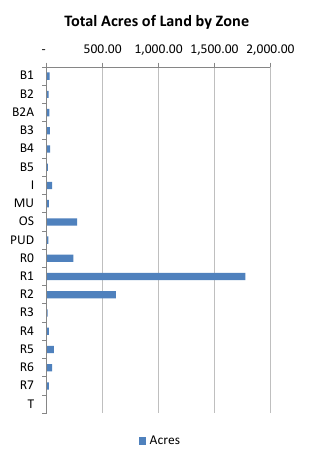 The folks in Arlington’s Department of Planning and Community Development were kind enough to provide me with a copy of the underlying numeric data. I’ll present that shortly, but for the moment, I’d like to make a proposition about zoning maps: that they are budgets given in acres rather than dollars. A zoning map takes a finite pool of resources (land) and allocates it among specific set of concerns (land uses).

Here’s the size of each district, along with the percentage of land that it accounts for.

I’m going to roll these up into four categories

I’d like to point out several things about this summary.

First, 85% of Arlington’s land is residential and 61% is exclusively set aside for single-family homes. When our zoning laws were re-written in the mid-1970’s two substantial goals were (1) limiting the potential for population growth, and (2) making Arlington a “traditional family town” (which I interpret to mean “a place for families with children”). The preference for single-family homes has arguably made those goals easier to achieve; single-family homes mean fewer homes per lot, and they offer enough floor space and bedrooms for families with children. I think we’ve met those objectives. Arlington’s population dropped from 54,000 in 1970 to around 45,000 today, we have well-respected public schools, and our single-family homes have a lot of utility for growing families. We’re a great town for raising kids. Our residential taxes are can be high, but I’d argue this is a design feature rather than a defect.

Second, 8.25% of our land is “Open Space”, aka “parcels under the jurisdiction of the Park and Recreation Commission, Conservation Commission, Arlington Redevelopment Board, Massachusetts Department of Conservation and Recreation, or Massachusetts Bay Transportation Authority (MBTA)”. It’s public land, and it’s a great asset. For better or worse, our Opens Space districts generate no tax revenue.

Third, 5.6% of the town’s land is zoned for commercial use. This is the set of land and buildings that can make up Arlington’s commercial tax base. When I moved to town in 2007, our commercial tax base was 5.4%; that figure increased for a few years (after the 2008 recession), eventually settling back down to 5.4% in 2019. With 5.6% of land zoned commercially, a 5.4% commercial tax base doesn’t strike me as unreasonable. I suspect the goal was to have enough businesses to provide local amenities, but without turning the town into a commercial center.

Finally, the “Other” category can be divided up three ways:

A common budgeting exercise is to take an existing breakdown and ask “what if we allocated things differently”? For the sake of discussion, let’s say we wanted 50% of the town to be Open Space (i.e., publicly-owned and publicly-accessible green space). This might be driven by a desire for more trees and wooded areas, better stormwater management, climate resilience, heat island reduction, and so on. The conceptual change is easy: take half the town, pick it up, and set it down on the other half. Done [1].

Stacking half the town on top of the other means we’d have enough room to fit all of the homes and businesses that we currently have. The buildings would be taller, there’d likely be far fewer single-family homes, and there’d be a ton of green space. As with any budget, there’s a tradeoff.

Or suppose we wanted to increase the town’s commercial tax base. This topic surfaces from time to time, particularly when the first set of property tax bills goes out during a fiscal year. Commercial property taxes are assessed in much the same way as residential: the assessments are based on the value of land and buildings; dollars and square feet [2]. One can increase dollars (i.e., when a commercial property is sold above its assessed value), one can increase square feet (by allowing larger buildings, or allowing some non-commercial land to take on commercial uses), or one can try to find a way to reduce the total assessed value of residential properties. If none of those choices are appealing, then you probably won’t get a higher commercial tax base. Again, budget tradeoffs.

In conclusion, my goal has been to get people thinking about Zoning Maps as a form of budget. Arlington’s capital and operating budgets have changed over time, as has our zoning map. I’d like us to think of what we might do differently in the future.

[1] In reality, the implementaton details would probably be hideously complex; but the concept is simple.

[2] There’s also a “Personal” component to commercial taxes, which involves equipment and supplies used in conducting a business. This is mere sliver of Arlington’s total tax revnue.